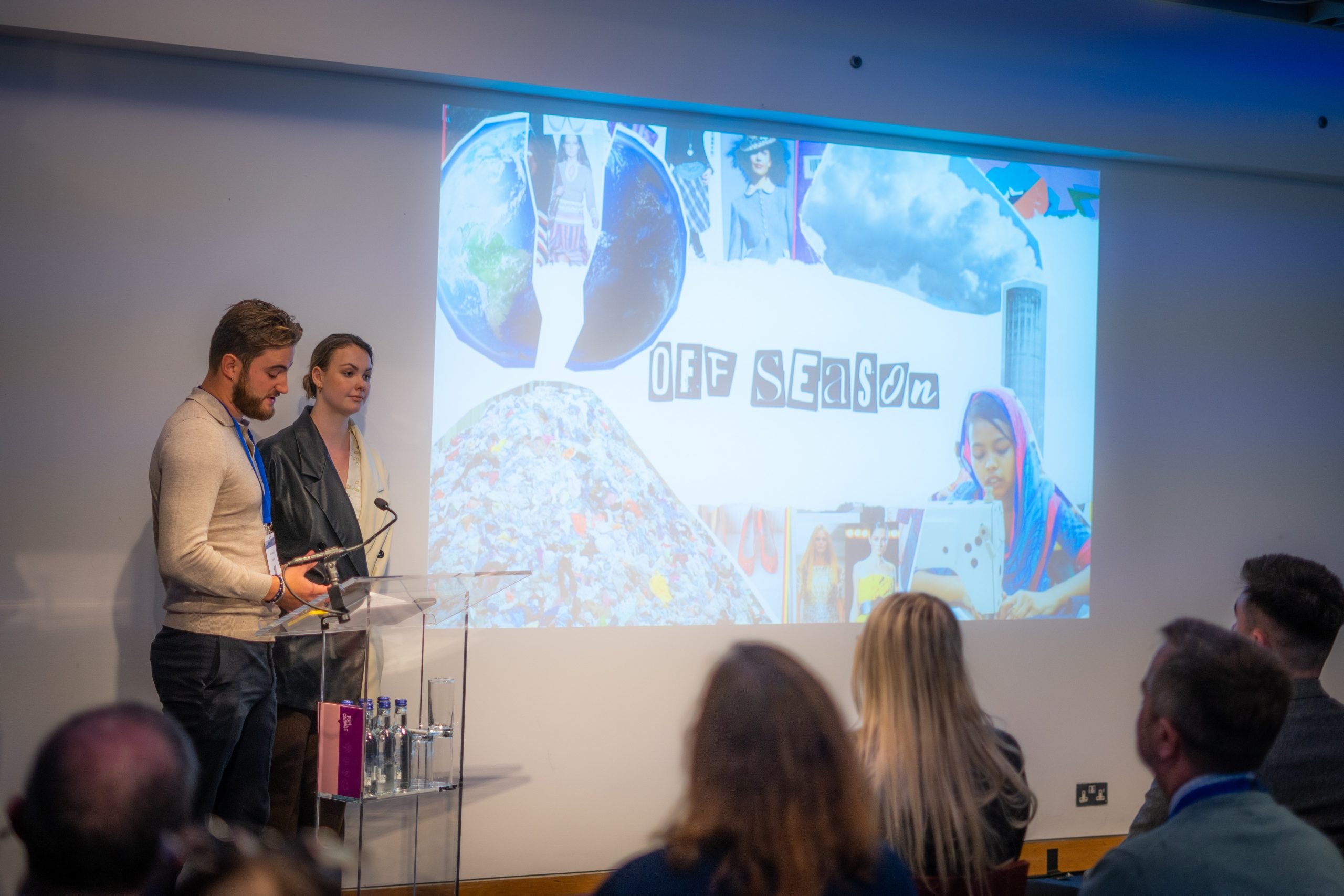 A conceptual anti-fast fashion campaign which could reduce landfill, water usage and CO2 emissions has been developed by a group of young PR and marketing students and professionals.

Off Season encourages consumers not to buy cheap and disposable items of clothing during January and February, with a challenge to social media influencers and manufacturers to focus instead on swapping, mending or customising existing clothes.

Following presentations and audience votes, the winning campaign, by the Changing Tides team, was chosen to be presented at the New York Times Climate Hub at COP26.

Their concept was built around finding a solution to the fast fashion industry contributing to 20% global waste water and 20-35% of ocean microplastics as well as being the second biggest contributor to CO2 emissions.

Jack from Changing Tides said: “We looked at the reasons for overconsumption and the pressure to keep up with fashion trends, with 90% of millennials stating they would make a purchase based on content generated by an influencer. We believe the solution is to buy less on a global scale.

“Our Off Season campaign proposes a break from the fashion industry in January and February – so no buying clothes, no posting outfits and no stress, both for ourselves and the planet.

“We’d love to launch the campaign with a documentary and raise awareness of fast fashion’s impact on the planet, while championing sustainable clothing brands and encouraging mass participation in Off Season. We challenge brands to participate in any way they can during Off Season, such as running swap swaps or repair shops.”

The team estimates Off Season could reduce the impact of fast fashion, with the potential to save 102 billion items from landfill, save 76 billion litres of water and 540 million fewer tons of CO2 entering the atmosphere.

The innovative idea was presented as part of the Creative Ignition: Art and Fashion, a Spark for Change event at the New York Times Climate Hub at SWG3 in Glasgow, run by Creative Inverclyde.

Fuel Change aims to engage young people from all walks of life and empower them to create a carbon neutral future for themselves and future generations, with the emphasis on action and not just talk.

The organisation is fast gaining traction among government, industry and the education sector, with the ambition to eventually become a global platform that galvanises young people into taking meaningful action to address climate change, protecting the planet for their future and their children’s future.

This is the latest in a series of Fuel Change challenges, which were established to spark a means by which the Scottish economy can shift to Net Zero, while using the innovative ideas to create wider commercial, economic benefits.

The challenges offer an opportunity for apprentices and young people to develop innovative, but practical, solutions to real low-carbon challenges.

Fuel Change chief executive David Reid said: “Fuel Change was set up to give young people a meaningful voice and the opportunity to do something tangible to help tackle the climate crisis. The ideas the teams came up with were incredible and we were honoured to be able to give Changing Tides the chance to present their Off Season campaign as part of the New York Times Climate Hub at CO26.

“The anecdotal evidence suggests many of the next generation do not respond to a figurehead such as Greta Thunberg and the current messages aren’t engaging, so we challenged these young marketing professionals to devise a campaign that would resonate with people of their own age.

“Off Season was extremely well thought out and relevant to a young demographic who respond to influencers and use social media in their every day lives.

“It has huge potential and reinforces the possibilities that come from empowering young people to come up with solutions to real carbon issues.”

The Scottish Government recently announced a funding package of £500,000 to allow Fuel Change to engage with more young people over the next year and help hit the target of a low-carbon Scotland by 2045 and create real solutions, which can be implemented by the partner companies in Scotland and potentially across the world.

As part of its mission to be active in ‘Every School, Every Workplace, Everywhere’, Fuel Change also runs a schools programme, which is focusing on introducing the issue of climate change and ‘carbon literacy’ into every subject on the curriculum.